Concerns Over Excessive Testing of People with Type 2 Diabetes 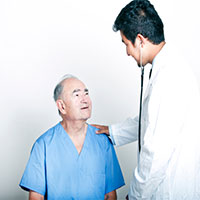 Over half of patients with controlled type 2 diabetes have many more tests than is currently recommended by national guidelines, and this has been associated with overtreatment of the condition, suggests a large U.S. study published in The BMJ last week.

Overtreatment is a concern because it can lead to patient harm as well as inefficiency and waste in the healthcare system, explain the authors, and they recommend that "patients and doctors should question the value of routine tests."

The glycated haemoglobin test is used to monitor blood sugar control in patients with type 2 diabetes and is used to make adjustments in treatment regimes.

Professional societies and regulatory bodies recommend that glycated haemoglobin testing is performed once or twice a year in patients with good blood sugar control and no history of hypoglycaemia.

The test provides a measure of average blood sugar control over three months, and more frequent monitoring is not representative of steady control and therefore is not clinically informative, explain the authors.

However, previous studies have suggested a high prevalence of repeat glycated haemoglobin tests. So they carried out a retrospective analysis to determine the frequency of such tests, and the effect of these on treatment regimes.

They analysed data on 31,545 commercially insured adults taken from a national administrative claims database between 2001-13 across the USA.

Patients were aged over 18 years, had type 2 diabetes, had stable blood sugar control without use of insulin, had no history of acute diabetes complications, and were not pregnant.

Testing frequency was measured over 24 months following the index test that indicated a normal blood sugar level. Changes in treatment regime were measured within three months of the index test.

This is an observational study, so no firm conclusions about cause and effect can be drawn.

Nevertheless, the authors say the association between repeat tests and potential overtreatment is "concerning" particularly because of the link between intensive treatment and adverse health outcomes. These include hypoglycemia, cardiovascular problems, and death.

A possible reason for repeat tests is fragmented care coordination because the authors found that the odds of redundant tests increased with the numbers of doctors seen.

Other reasons, but not tested for in this study, include clinical uncertainty, misunderstanding the nature of the test and the need to fulfil patient, institutional and regulatory requirements.

In a linked editorial, Rodney A Hayward from the University of Michigan writes that "improvements in diabetes care are a medical success story, but increasing evidence suggests that overly aggressive treatment is an under-appreciated problem."

He says that this latest study "probably greatly underestimates the size of the overtreatment problem" because current guidelines have not changed since these were developed 25 years ago when diabetes complications were more common.

"Improved treatments and better management of blood sugar levels have reduced disease progression and complications," he explains, and this makes "the benefits of tighter glycemic control smaller and the chance that treatment harms will outweigh treatment benefits much greater."