The blisters often appear on the legs and arms and seem to appear for no reason. In most cases, when they disappear, they do not leave scars.

What Causes Diabetic Blisters?
There is no single known cause for diabetic blisters. Many of those who have diabetic blisters may also have neuropathy and nephropathy. Some researchers think that a decreased ability to sustain an injury may play a role. And in people with heart failure, the swelling that can result from that condition may be enough to cause the blisters.

Many people who develop the diabetic blisters have had diabetes for many years or have several complications from the disease.

What Are the Symptoms of Diabetic Blisters?
Most commonly, the blisters appear on the legs and feet. Rarely, you may also notice them on your fingers or the backs of your hands. You might go to bed one night with no blisters, wake up, and notice them.

The blisters tend to be large and irregularly shaped. Sometimes, they look like a burn. There are commonly clear and contain sterile liquid.

You might feel a burning sensation or a twinge of discomfort, but many people do not feel anything - other than a bit of surprise at seeing the blisters where there were none before.

How Are Diabetic Blisters Treated?
In many cases, the blisters heal by themselves, within two to four weeks, and no treatment is needed other than keeping them clean.

On occasion, though, the blisters may burst. If this happens, your doctor may prescribe an antibiotic ointment or something to help dry the blister.

If the blister becomes infected or develops an ulcer, it will be treated more like a wound. Antibiotics may be used. In very severe cases, skin may need to be debrided (removed) to help the healing process.

How Can Diabetic Blisters Be Prevented?
Keeping your blood sugar levels within the range recommended by your doctor may help prevent many complications of diabetes, including diabetic blisters.

If you do get blisters, however, they may re-occur. 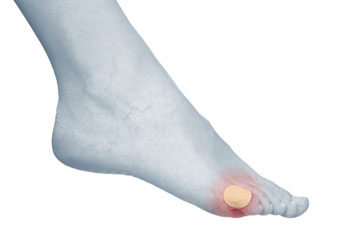