Is it Time to Stop Reheating Food with Plastics? 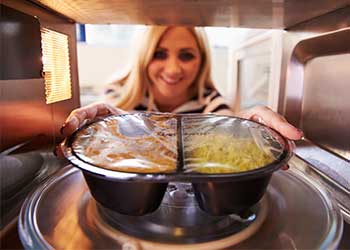 The chemical compounds, di-isononyl (DINP) and di-isodecyl phthalate (DIDP), are used in things such as plastic wrap, soap, cosmetics, and processed food containers; basically almost anything we put our food in. What may make matters worse are these two chemicals took the place of di-2-ethylhexylphlatate (DEHP), which was removed from these products for similar reasons, having negative effects on a person’s health.

So how do we protect ourselves, more importantly children, from these unhealthy chemicals?

Researchers suggested when using the microwave to not use these plastic containers nor cover your food in plastic wrap, as well as washing out the harsh chemicals by hand as opposed to using the dishwasher. Researchers also said to be wary of containers with the numbers 3,6 or 7 on the bottom in the middle of the recycle symbol as they are likely to have these dangerous chemicals.