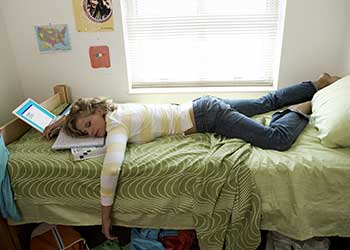 Everyone sleeps, but depending on when you sleep could increase your risk of type 2 diabetes. A recent study published in the Endocrine Society’s Journal of Clinical Endocrinology & Metabolism surmised that people that stay up late are vulnerable to more health risk than early-risers. However, it’s not just a matter of when you go to sleep, but the habits that could come with it.

People that stay up later are likely to have poor sleep quality, sleep loss, and inappropriate eating habits, as well as other unhealthy habits such as smoking and a sedentary lifestyle, all of which can lead to metabolic change and increased health risk.

“Regardless of lifestyle, people who stayed up late faced a higher risk of developing health problems like diabetes or reduced muscle mass than those who were early risers,” says Nan Hee Kim, MD, PhD, one of the study’s authors.

The study consisted of 1,620 subjects, ages ranging from 47-59. The subjects were then broken up by chronotypes, or a person’s natural sleep-wake cycle. You had your people with their morning chronotypes, their evening chronotypes, and the remaining being between the two.

The results showed that men with evening chronotypes were more likely to have type 2 diabetes and loss of muscle mass compared to their early-riser counterparts. Evening chronotype women showed to have more body fat and a higher risk of metabolic syndrome compared to early rising women.