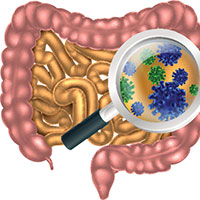 Most of the around 100 trillion bacteria living in hiding in our intestines--the gut microbiota--are difficult to grow using traditional methods, because they do not tolerate atmospheric oxygen.

New research based on gene technology and advanced bioinformatics has made it possible to analyse the composition and function of intestinal bacteria from their DNA. The bacteria produce many different types of substances that affect our physiology and health in numerous ways.

In the field of disease research, changes in the composition and function of the complex intestinal bacterial communities--so-called dysbioses--have become a focus area. It is, however, a weakness of the studies that researchers have not taken into account the potential effects of drugs on the patients' intestinal bacteria.

For that reason, it is not possible to determine which dysbiosis is associated with specific diseases and which changes in intestinal bacteria are associated with medical treatment. At the same time, conflicting results from research in intestinal bacteria are reported for the same disease. It might be due to the fact that the effect of drugs on the composition and function of the gut microbiota has not been taken into account.

European and Chinese researchers in the EU-funded MetaHIT consortium have studied the intestinal bacterial communities from Danish, Swedish and Chinese patients with type 2 diabetes as well as from healthy individuals--a total of 784 people were studied. The purpose of these studies were to separate changes in gut microbiota associated with disease from changes that may be associated with the intake of certain types of medication. The findings have recently been published in the prestigious international journal Nature.

The study shows that the most frequently used drug for the treatment of high blood glucose levels, metformin, causes favourable changes in the gut microbiota in patients with type 2 diabetes. This boosts the capability of the bacteria to produce certain types of short-chain fatty acids, such as butyric acid and propionic acid. These fatty acids can reduce blood glucose levels in different ways. Metformin is, however, also known for having adverse effects on the gastrointestinal tract, for example bloating and increased flatulence. The study has provided the researchers with a possible explanation, since patients treated with metformin have more coliform bacteria in their intestines, which may be one of the causes of the inconveniences.

"We weren't able to show that other types of antidiabetic drugs had any actual impact on the gut microbiota. When studying type 2 diabetes patients not being treated with metformin, we did, however, discover that they--irrespective of whether they were from Denmark, China or Sweden--had fewer of the bacteria which produce the health-promoting short-chain fatty acids. Whether the lack of certain combinations of fatty acid producing intestinal bacterial species is one of the factors contributing to type 2 diabetes is currently being investigated," says Professor Oluf Borbye Pedersen from the Novo Nordisk Foundation Center for Basic Metabolic Research at the University of Copenhagen, who is the senior author on the Nature report.

Source: University of Cophenhagen the Faculty of Health and Medical Sciences