You might hear talk that diabetes is linked to an increased risk for dementia. What do you know about this subject? Can you define the term dementia? Do you know when you should discuss possible dementia with your doctor?  This blog will explain what dementia is and follow with recent research on diabetes and dementia. A link will be provided for you to see the names of studies on dementia that have been completed as well as those that are still recruiting subjects. 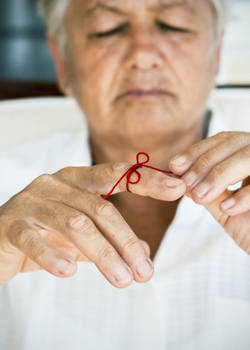 What does the term “dementia” actually mean?

Examples of these changes include loss of:

These changes can lead to personality changes. Some people with dementia experience frustration, delusions and agitation. The diagnosis of dementia often includes memory loss but memory loss alone is not enough to diagnose dementia.  Technically, two different functions of the brain need to be affected for a doctor to give the diagnosis. The example given by the NINDS is memory and language skills.

Examples of diseases that cause dementia include:

There are problems that also cause dementia which if caught early may be reversible. These include reactions to medications, thyroid imbalance, deficiency or lack of absorption of vitamins such as B12 and thiamine, and for people with diabetes, repeated episodes of hypoglycemia. Here is a detailed list of potential metabolic problems that can cause symptoms of dementia that may lead to dementia itself. Dementia should not be thought of as part of a normal aging process. (2)

When should you ask your doctor if something is potentially wrong?

The Joint Commission (an agency that certifies many health care organizations in the United States), has an excellent brochure on memory problems and dementia. Information includes when you should be concerned about memory, what your doctor will do, what should you or your advocate ask the doctor, and what to ask your doctor if you are told you have dementia.

What is the relationship between blood glucose and dementia?

A study published in 2014 of over 29,000 patients with diabetes concluded that if severe retinal disease was diagnosed at baseline they were at a 42 percent increased risk for developing dementia. The authors of the study also mentioned the relationship between hypertension and inversely low blood pressure, high cholesterol as well as a history of severe hypoglycemia. (4)

Recommendations for people with diabetes to reduce their risk of dementia

It is recommended to reduce the risk of dementia, to keep glucose levels under control.  It is also recommended that people exercise their minds and bodies to help prevent dementia for people with diabetes. Other recommendations include following a meal plan that meets all nutritional needs (if in question get help from your dietitian). (3) For people taking the medication metformin, have vitamin B12 levels evaluated periodically can help avoid deficiency of vitamin B12. (5) People taking metformin have an increased risk of low vitamin B12 levels.

If a loved one has developed dementia and/or you are interested in learning about clinical trials, go to https://clinicaltrials.gov/search/term=Dementia. We at DiabetesCare.net want you to take the best possible care of yourself!