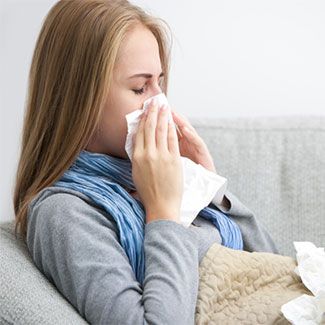 Every year since I’ve been at college, I get a call from my mom reminding me that I need to go to the pharmacy as soon as possible to get a flu shot. In order to deter her constant reminders, I usually tell her that I already got the shot while making a mental note that I really should do that the next time I go to the store. While I don’t avoid the flu shot for pain reasons, it is more so an annoyance as it takes forever for the pharmacist to call your name and I can only take my heart rate so many times without looking like an eight year old.  My mom always reminded me how important it was for me to get the flu shot because of the effect that sickness can have on blood glucose levels, and I never really understood the significance of getting this annual shot until a recent encounter with being sick.

Last Friday, I went to bed around 10pm with a fever of around 100 degrees F. I took a couple of Advil (ibuprofen)--I think that this pill performs miracles--checked my blood sugar, which was around 150, and decided to go to bed. After waking up around 2am, and feeling disoriented, I knew that my blood sugar was probably going low. Not only was my blood sugar 40 and falling, but I was shaking uncontrollably and sweating profusely.

I am usually on top of my game when my blood sugar is low, but on this night I could not get myself up. All I wanted to do was lie in my bed, but I knew this would only result in me passing out. I tried to call out the names of my roommates, but no one could hear me, especially after a night out. With great effort, I peeled myself out of bed all the while cramming glucose tablets down my throat. I poured myself a full glass of lemonade using the drink as a chaser to the glucose tablets I was ingesting as quickly as possible.

When my blood sugar crashes, I tend to overcorrect especially because I would rather take insulin later rather than feel the dizziness of a low, which in reality might only be five minutes but feels much longer while in the midst of it. After seven glucose tablets and a lot of lemonade, I decided it would be best to lie down on the kitchen floor to wait for my blood sugar to come up. Thankfully, one of my roommates woke up and found me in my pathetic state on the ground. She looked at me skeptically until I told her that my blood sugar was low and that I didn’t want to fall asleep before my numbers reached normal levels. After twenty minutes, my glucose monitor told me that my blood sugar was 100 and rising so I felt safe to go to bed. For once I was hoping my numbers would breach 200 so I could sleep in peace.

Unfortunately, I was not so lucky. I woke up an hour later shaking once again, and this time my blood sugar was 35. How my blood sugar could fall so rapidly after not taking any insulin for the past few hours and after consuming what I concluded was at least 50 grams of carbohydrates was beyond me. I called out for my roommate Sara and muttered the words “Coke” and went to my new favorite spot: the kitchen floor.

While I have had countless lows, I had never felt anything like this. I felt myself fading, and my body was shaking uncontrollably. The thought of consuming any more sugar was making me nauseous and I had to force the Coke down my throat in small increments to avoid vomiting. Rather than chugging the Coke, I had to convince myself that if I took one more sip, I could go to sleep that much faster. I was miserable, and my montior said my blood sugar was still falling. For the first time since I had been diagnosed, I actually considered going to the emergency room. I wanted to call my mom to ask what to do but it was 3am, and I had to tell myself to be patient. Would I be overreacting by going to the hospital? I was in agony trying to force the Coke and glucose tablets down my throat. I was thinking about if I had ever used glucagon. And even if I had it with me, I was almost sure it would be expired.

One hour and several Cokes later, my monitor told me that my blood sugar was 150 and staying steady. I don’t think I was ever more excited to see a number in range in my entire life. The shaking had stopped and I was finally able to sleep. Although I was fairly certain my blood sugar was going to be very high in the morning, I simply did not care at that moment. It was the middle of the night, and I was feeling sick and exhausted. When I did wake up that next afternoon, my blood sugar was only 200, which was quite shocking considering how much sugar I ingested hours before to combat those lows.

Although I'm not sure what type of sickness I had that night, I was thankful that I had gotten the flu shot this year, because my symptoms could have been much worse, or I could have been sick much more frequently. While nobody enjoys the flu or sickness in general, a serious virus like I had that night can be dangerous for people with diabetes, especially as you never know how this can impact your numbers. I was fully prepared to go to the emergency room if my blood sugar levels had not leveled out. Diabetes is difficult enough to manage without some virus coming in and making it that much harder. Next time my mom tells me to get my flu shot, I’ll be the first in line.