Taking My Type 1 Experience and Educating Others 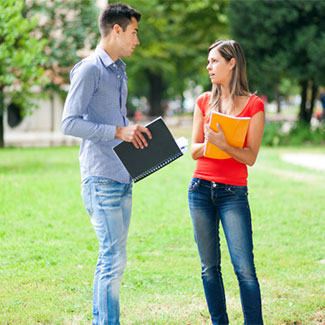 When I was in third grade, every student in my class wanted to be my best friend. If my blood sugar was high or low, the teacher allowed me to choose a friend to walk me to the nurse’s office who would proceed to give my friend a jolly rancher before sending that student off to class. I was lucky enough to stay with the nurse while popping jolly rancher after jolly rancher in my mouth while eavesdropping on the drama at our small Catholic school. The school nurse and I became pals, and I would stay at the nursing station as long as possible before she sent me back to class. Sometimes, I would even get to take a nap if I felt a little off from changes in blood sugar levels.

While I don’t have the luxury of skipping class in college to catch up on the latest gossip, diabetes has also helped me in a variety of ways, particularly in education. Like many health issues, diabetes has a stigma attached to it that stems from ignorance concerning the disease. I still remember a teacher telling me that I could have a fruit snack while the rest of the class ate cookies, which in retrospect, probably had the equivalent number of carbohydrates but tasted like my glucose tablets.

Although I don’t share with everyone I meet that I am a type 1 diabetic, I do try to educate people when I have the opportunity to tell them more about the disease. It is hard for me to bite my tongue when people claim they know about juvenile diabetes saying that either I was born with it or that my parents gave me an excess of sugar causing my pancreas to stop producing insulin. The truth is, no one is certain what causes type 1 diabetes--whether it is genetics, or the environment, or a compilation of many factors. While I did enjoy a fruit roll up here and there, I ate the same diet as almost every other kid I knew. I have learned after one trying experience that because many people are just ignorant about diabetes, I need to be more patient and not take personal offense to the common misconceptions.

When I was a freshman in college, a friend posted a joke on my timeline to the effect of a boy getting diabetes from eating twelve Oreos. First of all, it is quite easy to eat a stack of Oreos and I bet many people, diabetics or not, have done this especially when they are the Halloween Oreos. I sat in awe that someone had the audacity to write this on my wall for all my friends and other people to see, as if blaming me for my diabetes. This is not the first time that someone assumed that my diet as a child led to my diabetes, but this was the first time that someone had made it public. Mortified, I quickly deleted the post and sent this girl a snarky message essentially saying that she had no idea what she was talking about and that she should read up on diabetes before making such a joke. While I was offended by the comment, I look back on the experience wishing I had reacted in a more mature, levelheaded manner. I have tried since then to simply tell someone when he or she makes such an assumption the truth about type 1 without judgment or offense.

Both type 1 and type 2 diabetes are simply misunderstood. When I was first diagnosed, my parents and I had no idea what type 1 diabetes was and what that meant in regards to lifestyle changes. Diabetes certainly has changed my life, but that is not to say that it has only provided negative feelings. Without type 1 diabetes, I would never have become responsible for my health and I would not be the person I am today. This is not to say that I am trying to find a silver lining or that I wish I didn’t have it. It is more so that diabetes has helped me become the person I am today and in some way, I am thankful for that. While I am often disheartened by the negative connotations associated with diabetes, I hope that I can continue to educate people about the disease. My hope is that in the future a young diabetic will get the same cookie as everyone else and not have to be stuck eating a blueberry fruit snack.