Should sodas and other sugar sweetened beverages come with warning labels? Should these products contain warning labels that alert the public about the potential long term health risks? These warning labels would be similar to labels on tobacco products. The question is: will it make a difference? 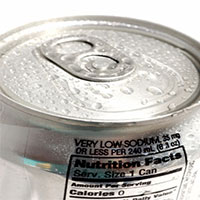 As California goes, so does the nation, or at least that is what happens quite often when something starts in the Golden state, and it is often enacted or repeated across the United States. In this case, the proposed bill, the 2015 California Sugar Sweetened Beverage Safety Warning Act-SB 203 would require sugary drinks to carry warnings that state, “drinking beverages with added sugars contribute to obesity, type 2 diabetes, and tooth decay.” (1)

This proposed bill was developed by a national panel of nutrition and public health experts. It was designed specifically to educate the consumer and protect the consumer about the dangers of sugary drink consumption. If it goes into effect, the warning label would be required on beverages containing more than 75 calories per 12 ounce serving, including regular sodas, sweet teas, energy drinks, and sports drinks. (1)

Adding warning labels to beverages can only help consumers make better choices. Even if consumers ignore the proposed warnings, would it cause harm to still have them on packages?

Some interesting information that we should be aware of:

Decrease your glucose levels and your weight by avoiding beverages with calories. If you tend to drink a lot of sugary calorie laden beverages, I encourage you to keep track of how much you are actually drinking for a couple days, and record how many calories you are consuming from these beverages. Avoiding these calories could help people with weight loss, and provide results quickly. If you prefer to avoid artificially sweetened beverages, than you could try seltzer water, water with lemon or cucumber, or plain brewed iced tea.