Afrezza: Will it revolutionize insulin therapy? 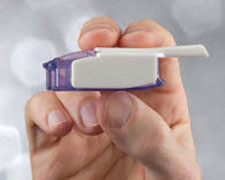 Afrezza, (insulin human) inhalation powder, is a new inhaled insulin which was approved by the Food and Drug Administration (FDA) last summer. It was developed by MannKind and it will be marketed by Sanofi. The two companies recently announced that Afrezza was available by prescription in the United States. As such, people with diabetes as well as providers may have some questions about the new medication.

This new form of insulin is approved for people with type 1 and type 2 diabetes over the age of 18. Afrezza eliminates the need to puncture the skin for insulin therapy because people accessing the inhaled insulin use an inhaler filled with an insulin dose. (The Afrezza delivery cartridge and inhaler are pictured here.)

Afrezza is contraindicated in patients with chronic lung disease such as asthma and COPD because of the risk of acute bronchospasm in these patients. Before initiating therapy with Afrezza, pulmonary function tests including FEV1 are necessary.

Clinical trials involving patients with type 1 and type 2 diabetes documented that the most common adverse effects reported were:

In a study comparing Afrezza with insulin aspart (Novolog, Novo Nordisk) in patients with type 1 diabetes the following results were reported:

In a study involving patients with type 2 diabetes, Afrezza was added on to oral antidiabetic medications and compared with placebo. The following results were reported:

Afrezza has shown to have a quick onset of action similar to injectable meal-time insulin but is proposed to have a shorter duration of action, which may benefit patients with diabetes. For example, residual insulin that may occur with meal-time injected insulin can potentially increase the risk for hypoglycemic events.

I believe the biggest safety concern for Afrezza comes from its inhaled delivery mechanism. It is not clear what long-term effect inhaled insulin might have on patients' lungs. The FDA recommends that patients take a lung test before starting Afrezza, after six months, and every year after that. Some of that concern might come from Exubera, a previous inhaled insulin product marketed by Pfizer, which was linked to lung cancer. Another big concern is the cough with or without sore or irritated throat. Some patients will not be comfortable with the irritation and cough and it may be exacerbated further coughing during cold and flu season.The question remains what would patients do in periods of upper respiratory infections. I assume they may have to switch back to insulin injections. Also, I am concerned about proper inhalation techniques and the proper use of the insulin cartridge. Improper inhalation could deliver less inhaled insulin, and may put the patient at risk for hyperglycemia. Additionally, using a couple of puffs to make up for a cheat meal as opposed to the number of units prescribed could put the patient at risk for hypoglycemia.

Nonetheless, Afrezza has the potential to capture a large share of the diabetes market, especially for patients with type 2 and the convenience factor could be the greatest marketing advantage. Patients that I spoken to about it expressed excitement at the thought of being able to take their insulin in a puff from the insulin inhaler, rather than have to give themselves injections. This factor alone could help increase compliance with insulin regimens in the type 2 patient population and has the potential to change the face of diabetes therapy.

The FDA has provided some additional information about Afrezza, which can be found here, and to learn more about Afrezza's inhaler technology, go to MannKind's site here.