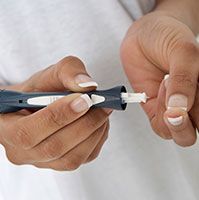 With the prospective of new insulin products coming to the United States,  Novo Nordisk  presented highlights from its diabetes portfolio at a briefing at the 50th annual meeting of the European Association for the Study of Diabetes (EASD) in Vienna, Austria. A new treatment that was presented is the combined therapy Ryzodeg (insulin degludec/insulin aspart). This medication is not currently available in the U.S.

Ryzodeg combines degludec (Tresiba), with insulin aspart (NovoRapid) in a single pen injector. The combination of two insulins--insulin degludec and insulin aspart--are measured in a ratio of 70% and 30% respectively, and are delivered twice daily before meals.

Study-related data, unveiled at a meeting of the EASD in Vienna compared Ryzodeg with basal-bolus treatment delivered twice daily with Tresiba and two to four injections of NovoRapid for a period of 26 weeks.

The results reported were as follows:

The need for combination therapies including insulin therapies for type 2 diabetes are becoming increasingly common as patients continually require additional medicines to improve glycemic control. I believe that Ryzodeg has the opportunity to improve compliance with insulin regimen since so many patients despise having to inject both basal and bolus insulin products multiple times during the day. The combination of insulin degludec and insulin aspart in one pen, twice a day, can reduce the burden on patients currently using basal-bolus regimens who may need to take up to four daily injections.

When I think about twice-daily insulin, I also think about the combinations that included NPH insulin and rapid acting insulin.  Many of my patients who were on the NPH and rapid acting insulin combination therapy were complaining of nocturnal hypoglycemia and had more glucose fluctuations during the day. From the  information published about Ryzodec, these complaints did not surface.

The one potential issue I believe is still left to be determined is if this new combination product will be able to control glucose after late evening snacks. Basal-bolus regimens traditionally appear to have better control of meals and snacks compared to NPH and rapid acting insulin combinations. The idea of a longer duration of action for an insulin combination product still needs to be tested in the American market to see if it will alleviate barriers to good glycemic control that providers and patients face today.

Once approved in the U.S. market, Ryzodeg will be a treatment option which will provide comparable glycemic control, fewer injections,  and reduced rates of hypoglycemia compared to basal-bolus regimens. In addition, this new treatment offers the potential for a simple alternative to basal-bolus for patients who require intensification of basal insulin regimens.