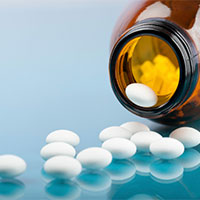 The FDA recently announced that sodium-glucose cotransporter-2 (SGLT2) inhibitors such as canaglifozin (Invokana), dapaglifozin (Farxiga), dapagliflozin and metformin (Xigduo XR), empagliflozin (Jardiance),  and empagliflozin and linagliptin combination (Glyxambi) may be linked to cases of increased levels of acid in the blood. SGLT2 inhibitors is the newest class of medications to treat patients with type 2 diabetes.

This class of medications is an inhibitor of SGLT2, which is responsible for at least 90% of the renal glucose reabsorption (SGLT1 being responsible for the remaining 10%). Blocking this transporter causes about 100 grams of blood glucose per day to be eliminated through the urine, corresponding to about 450 kilocalories. Additional water is eliminated by osmotic diuresis, resulting in a lowering of blood pressure. Two thirds of the resulting weight loss are caused by the body using up fat, as a source of fuel,  to replace the lost glucose, and the rest is mostly water.

This class of medications may potentially increase the risk of dehydration in combination with diuretic drugs, especially in elderly people. This mechanism is associated with a low risk of hypoglycemia compared to other antidiabetic drugs such as sulfonylurea derivatives and insulin.

The FDA received reports of upwards of 20 cases of diabetic ketoacidosis (DKA), ketoacidosis, or ketosis in patients that have used the SGLT2 inhibitors from March 2013 to June 2014, with the number of cases rising since that point. The reports identified the trigger points in the cases included as major illness, reduced food and fluid intake, and reduced insulin dose. Subsequently, the FDA issued a warning to inform patients to contact the FDA if they experience side effects from this class of medications.

Based on the information provided, it is difficult to assess whether or not SGLT2 inhibitors are the cause for ketosis in this patient population.  When patients suffer from illness, their food and fluid consumption is reduced leading to dehydration and an increase in glucose concentration in the blood. SGLT2 inhibitors may be linked to an increase in water excretion from the body and the use of fat as an alternative source of fuel, which aggravates the formation of ketones.

However,  I don’t believe SGLT2 inhibitors may be causing ketosis directly.

Many patients with diabetes are on multiple medications for various diseases and conditions that may also contribute to hyperglycemia or dehydration.  Many times poor eating habits and insufficient glycemic control exposes the patients to hyperglycemia. In times of illness where patients believe that if they don’t eat as much they should abstain from taking antidiabetic medications including insulin, glucose levels rise significantly and pust the patient at risk for ketosis. Those cases have to be scrutinized to rule out other variables that may put patients at risk.

As a clinician, I believe that the risk for ketosis has not increased due to the use of SGLT2 inhibitors, but due to poor patient diabetes education. Patients need to be educated on proper sick day management and adequate hydration not only during sick time but every day. Nonetheless, healthcare providers should be alert and monitor their patients using this class of medications closely for  loss of electrolytes, dehydration, acute loss of weight, and the possibility of ketosis in special situations.