Who Can Benefit from the New U-200 Insulin? 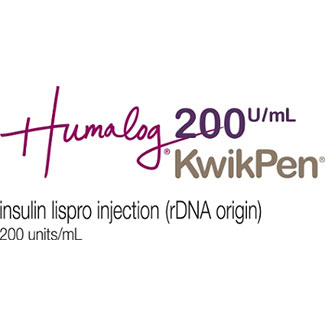 The Food and Drug administration (FDA)  recently approved a new 200 unit/mL formulation of Eli Lilly and Company’s pre-filled pen containing insulin lispro (Humalog U-200 KwikPen) for the improvement of glycemic control in patients with type 1 and type 2 diabetes. The new meal time insulin joins other insulin formulations that are not U-100 such as regular insulin, U-500, and of long acting insulin, U-300 (Toujeo).

This insulin is the first concentrated mealtime insulin analog to receive FDA approval. The Humalog U-200 KwikPen delivers the same dose as Lilly’s Humalog U-100 KwikPen in half the volume.The U-200 KwikPen holds 600 units compared with 300 units of insulin held by the U-100 formulation. The FDA based its approval on data that demonstrated the bioequivalence of Humalog U-200 relative to Humalog U-100 in a pharmacokinetic/pharmacodynamics study. In the study, the most common adverse event associated with the use of Humalog was reported to be hypoglycemia.

Humalog U-200 KwikPen represents a new option for people with diabetes. The change in formulation  allows patients with diabetes who inject high doses of insulin to change their pens less frequently.  Fewer pen changes per month may help patients with diabetes who require higher daily doses of mealtime insulin better fit their treatment in their daily lives and thus, increase adherence to medication therapy.  The down side is a potential dose concentration confusion.  When concentrations of insulin change, some patients or providers may not be aware of the differences.  In my experience,  concentration dosing confusion that led to medication errors was reported when patients were converted from U-100 to U-500 Regular insulin. To reduce the risk for medication errors with the humolog U-200, providers and patients need to be educated about the differences between both formulations of humolog.  With the increase in insulin formulations on the market such as inhaled insulin, Afrezza, and the U-300 Toujeo, I believe that providers are becoming more and more overwhelmed with options and choices for their patients. In addition, many providers and healthcare professionals may be reluctant to use a more concentrated form of insulin because of the higher potential for hypoglycemia.

To answer the question whether or not the new insulin formulation U-200 will improve care, the answer is that I am certain that it will improve care. The question is who will be a good candidate for this new Humalog formulation. I believe that a patient with severe insulin resistance who requires large doses of insulin may benefit from this formulation.  On the other hand, a patient who has frequent fluctuation in renal function, history of hypoglycemia or has history of erratic eating habits may be a poor candidate for the U-200 humulog formulation.

In light of the new insulin products on the market and to ensure the safety of patients with diabetes, I hope that the associations that regulate diabetes therapy will step forward and provide clearer recommendations using dosing algorithms to assist providers to determine  when and how to use the different insulin products including U-200 humolog.