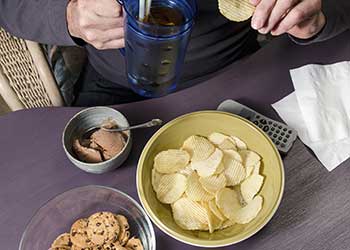 Fructose, a simple carbohydrate created from fruits and vegetables, can be found in the majority of our soft drinks and processed baked goods, mainly desserts. The increased use in our diets has made it that fructose accounts for 10 percent of our caloric intake for people living in America and between 15 to 23 percent for adolescent males.

Fructose causes significant weight gain, physical inactivity, and body fat deposition, according to a recent study performed by the Beckman Institute for Advance Science and Technology at the University of Illinois.

The study was performed with two groups of mice, one group given glucose, and the other given fructose. “We know that contrary to glucose, fructose bypasses certain metabolic steps that result in an increase in fat formation,” says Jonathan Mun, one of the study’s authors. The difference between this study and others that may have measured the effects of fructose on a diet is this study used the same caloric intake for both groups of mice, as opposed to one group having an increase caloric intake as well as fructose.

What they found was the group that was fed fructose had an increase in weight, liver mass, and fat mass compared to their glucose-fed counterparts. What’s also noteworthy is the fructose-fed mice’s lack of activity throughout the study. Even though researchers couldn’t pinpoint the reason for their inactivity, combining that inactivity with the high-fructose diet could lead to weight gain.

“Given the dramatic increase in obesity among young people and the severe negative effects that this can have on health throughout one’s life, it is important to consider what foods are providing our calories,” says Justin Rhodes, lead author of the study.