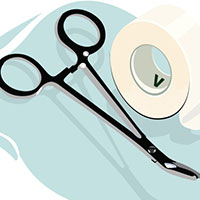 Researchers at the University of California, Los Angeles (UCLA), funded by the National Institutes of Health (NIH), have developed a synthetic biomaterial that fills wounds and aids in regeneration of skin cells, which ultimately improves wound healing.

In a study published in Nature Materials, the researchers reported that the new biomaterial is compatible with human stem cells and showed that it accelerated healing of wounds in mice.

The skin is an organ system at the interface between our complex anatomy and the often harsh elements of the environment. Normally, wounds in the skin trigger a rapid, orderly, and effective healing process. But serious wounds that span too great an area such as burns or occur in patients with compromised health conditions, such as diabetes and immobility, complicate skin wound healing. Millions of people in the United States are affected by skin wounds that resist repair.

Traditional treatments for such wounds often involve water-based dressings, called hydrogels. While effective in keeping the wound bed hydrated and as a barrier to infection, currently available hydrogels do not provide the physical support for new skin at the critical first stages of the healing process. The UCLA researchers addressed this problem with a reformulated hydrogel incorporating microporous annealed particles (MAPs)—tiny synthetic spheres that adhere to each other. MAPs create a strong scaffold that allows new cells to colonize and begin making new skin. They also enhance blood vessel growth to supply sufficient nutrients for rapid healing.

The idea of a porous scaffold is not new, according to the study’s senior author, Tatiana Segura, PhD, associate professor of chemical and biomolecular engineering at UCLA’s Henry Samueli School of Engineering and Applied Science. “Researchers in the field have known for some time that an interconnected microporous network allows for rapid cellular infiltration into the material without having to degrade it,” she said.

But her work provides a new twist that solves a biochemical limitation. Previous methods used to form the interconnected network resulted in a material that could not take the shape of the wound; thus pores formed in the product that were not completely interconnected. “The MAP technology is able to overcome this limitation by binding building blocks to each other, leaving behind an interconnected porous network,” states Segura.

There is an added benefit to this building block approach. To be effective, material used for tissue regeneration must precisely biodegrade as new tissue forms. If it degrades too quickly, the structure will not provide sufficient support for the new tissue. If it degrades too slowly, it can cause scarring. The MAP gel’s degradation rate can be tuned to the individual wound bed, and so provide a tailored healing platform. The researchers can specify chemical and physical properties of the material needed to achieve the ideal growth environment for skin.

In laboratory tests with human stem cells, the researchers showed that their method formed a porous scaffold with extensive cell networks within just two days, and the scaffold promoted skin growth over the course of one week. In contrast, skin cells that the researchers provided with a similar chemical and mechanical environment—but that was not porous—did not form a cellular network.

“I love this Goldilocks approach—not too much, not too little, but just what is needed,” says Rosemarie Hunziker, PhD, program director for Tissue Engineering and Regenerative Medicine at the National Institute of Biomedical Imaging and Bioengineering, part of NIH. “This novel material provides all the necessary physical properties for strong support, and degrades gradually as new skin is formed. It is elegant in both its complexity and simplicity, and offers real hope to patients struggling with debilitating wounds.”

“Every wound site is unique,” wrote the study authors, referring to physical and chemical properties that encourage regeneration of tissues within a wound. They observed that MAP scaffolds may offer a new “landscape of tissue regeneration” that is porous, injectable, and can be assembled in modules.

The research team’s next step is to further validate their results in studies with larger animals. The authors have launched a company, Tempo Therapeutics, in order to pursue the path towards commercialization of the wound healing technology.