News and Reviews from the EASD Meeting

The biggest news of the conference came when the EMPA-REG Outcomes were released for the first time. An article discussing the outcomes was published simultaneously in the New England Journal of Medicine. The study included over 7,000 patients with type 2 diabetes and established vascular complications across 42 countries to examine the cardiovascular safety of the sodium glucose cotransporter 2 (SGLT2) inhibitor empagliflozin (Jardiance).

Over the course of three years, this study showed that those taking empagliflozin had a lower rate of cardiovascular outcomes and death than those not taking the drug. It was exciting to be a part of this historic event, finding a diabetes medication that can have such benefits in reducing risk of heart attack, stroke, and death has been the Holy Grail for clinicians. Of course, time will tell if this is for the class of drugs or just this drug alone that holds this benefit.

The entire meeting was filled with very impressive presentations, but the exhibit hall with all the new technology is where the future of diabetes care. The reason I enjoy international meetings so much is that they have products that the U.S. has not seen yet. When talking to all of these companies, they all admitted it may be some time before the even think about submitting for FDA approval, which means the U.S. has a much longer wait to have these items in our hands.

There were some interesting devices, especially insulin pumps, and here are a few that debuted at EASD: 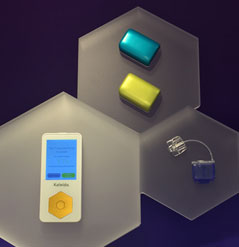 Kaleido tubeless insulin pump – This new “patch” pump is slated to be launched in the Netherlands and U.K. first--where they are based--then their intent is to tackle the U.S. market. The pump has 3 components: the handset, the pump (which comes in a variety of colors) and the infusion set which is attached to the insulin cartridge.This allows it to be disconnected and the infusion set tubing comes in several lengths.The colorful pump itself is rechargeable and reusable.The pumper can choose 2 colors of pumps, but when I was speaking to one of the employees at the booth, he agreed that they would never turn away someone who wanted to purchase more pumps so they can coordinate with their clothing!

EOFlow patch insulin pump – another patch pump originating in Korea, their ultimate goal is to be able to use this for all drug delivery (similar to Omnipod’s plans in the past), but they will start with insulin delivery first. The patch pump holds 200 units, similar to the Omnipod (which they compare their size in the photo below). It uses Bluetooth interface with a smart phone or portable controller to deliver insulin doses and make changes to the settings. Like all the tech companies, they are very interested in making this product available in the U.S., but their plan is to launch in Korea first, then Europe. 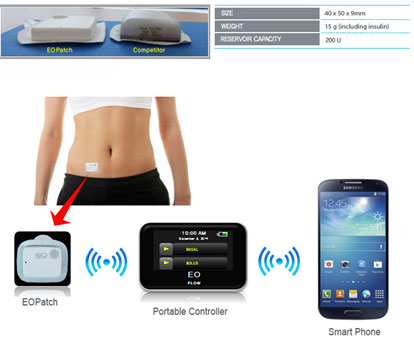 Accu-Chek Insight insulin pump – a welcome upgrade to the Combo pump. This pump uses pre-filled cartridges (NovoRapid), but they do plan on having empty cartridges for the user to fill in the future. The Accu-Chek Insight diabetes manager (the remote control) is a meter as well as the control to deliver insulin and make setting changes. The greatest thing about this new system is that you can make all the changes on the pump too!  At this point, the cartridge is only 160 units, so that may be a deal breaker for anyone who wants to only change their site and cartridge every 3 days (anyone who uses >50 units/day will need to change the cartridge more often). This pump will be launched in Austria in October, then Germany in the spring 2016. It is a safe bet that they will be submitting for FDA approval, so there may be a chance this could be in the U.S. by 2017, but that is just me talking.

The resounding theme, after walking around the exhibit hall, is that tech is here to stay and new products are being launched as we speak. It is an exciting time for diabetes management--don’t get me wrong, I know having diabetes still stinks--but this competition brings new and innovative ways to manage diabetes.