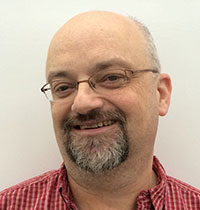 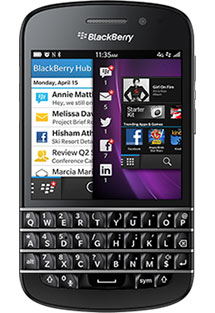 According to the International Diabetes Federation,  the top ten countries for number of people with diabetes between 20 and 79 years of age include India (65.1 million) and Indonesia (8.5 million) in 2013. In addition, Southeast Asia  has a high prevalence in the adult population and the numbers are rising.(1)

For this inaugural post, one of the topics that seems to be omitted from online discussions are reviews of diabetes-related apps for the BlackBerry platform.  Earlier this year, BlackBerry released the Z3 (named the “Jakarta”), which runs on its latest operating system, BlackBerry 10 (“BB10").  The Z3 was released initially in Indonesia only and quickly sold out; and according to the IndianExpress, it is also coming to India very soon. There are approximately three million BlackBerry users in India alone. It seems fitting, therefore, to find out which diabetes management apps are available for BlackBerry users. These apps are not specifically written for Southeast Asia; however, they can be used regardless of your geographic location. Over 40% of DiabetesCare.net's visitors are located in Southeast Asia!

While most new apps are written for Apple’s iOS or Google’s Android operating systems, there are also many useful apps that can help people with diabetes who use the BlackBerry as their primary smartphone to manage their glucose readings, blood pressure, carb intake, and more. Up until recently, those apps were written for earlier phones that were based on  the “legacy” BlackBerry 7 (BBOS) platform.

For legacy BlackBerry devices such as the Curve or Bold, HandyLogs Sugar is easy-to-use and works on BlackBerry devices running OS 6.x and 7.x.  It functions equally well on both physical as well as virtual (on-screen) keyboards. 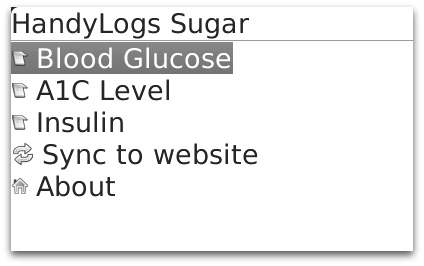 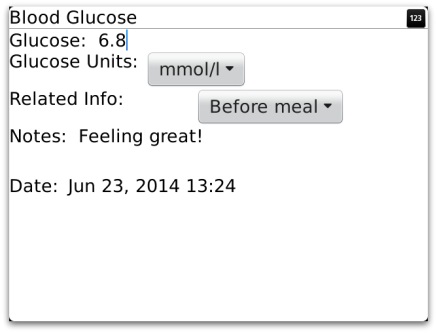 On the left is the app’s main screen, with the data entry screen on the lower right taken from the Bold 9900.

Entering a new value for any of the options: Blood Glucose, A1c Level, and insulin units taken is easily accomplished. Enter your glucose reading (in mg/dL or mmol/l), select the time of day, add any notes, then the date and time, and save.

Data you enter into your phone’s app can be synced with an account on the HandyLogs website on your computer. To enter information on your computer rather than on your phone, go to handylogs.com.  You can create a free account and then enter your data in a very similar look-and-feel to the BlackBerry version listed below: 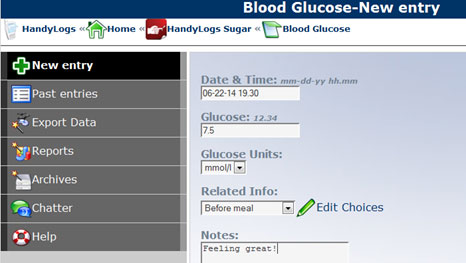 There are help screens for each area of the application that give you overviews of what they measure and general guidelines for good control.

An app such as HandyLogs Sugar can simplify your day-to-day tracking of your diabetes status by allowing you to add your information easily either from your phone or at a computer, and share data between the two. The ability to export your results to a spreadsheet file, email reports to yourself or your physician, access blogs with posts from other app users, gives you an all-in-one solution that is easy to use. While it does not include a food database that other apps might offer, this app is geared towards people who want to maintain the most important information right at their fingertips.

For BlackBerry 10, (BB10), the latest phones support a number of BB10-specific apps to manage your diabetes on a day-to-day basis. Just doing a search on BlackBerry App World brings up a number of useful apps, including the Pocket Diabetes Guide, A1c Calculator, Sweet Log, GliControl, iDiabetes, Diabetes Diet and many more. There is even a six-part series of BlackBerry apps based on the teachings of Ayurveda called Diabetes Solutions!  Using two of these apps in tandem, Pocket Diabetes Guide and GliControl, would be a great virtual diabetes management system on your BlackBerry.

Pocket Diabetes Guide, from ABE Designs, is a fantastic, free resource for diabetes-related terms, links to websites, tips for diabetes management, recommendations and information on insulin, medication, exercise and diet programs, skin and foot care, and more.  The app was developed by someone who lives with a parent who has been diabetic since childhood.  Her goal, according to her website, was to provide a guide for others that contained information that would be useful to her relatives and friends.  Diabetes affects not only the afflicted person but others in their circles as well.  This app is routinely updated with the latest information, and is highly recommended.

Finally, GliControl (available as a free demo and paid full version), similar to HandyLogs Sugar, allows you to enter your daily glucose readings, manage your dosages of insulin, view graphs of your progress, calculate carb-to-insulin ratios and much more.  A feature unique to GliControl is a “map” of your body that can help you decide where to inject your insulin or place your pump cannula.

There are other apps for your BlackBerrys that can be found by searching on BlackBerry App World. Great News! It has also just been announced that the next update to BB10 (10.3) will enable you to download and use apps written for Android phones directly from the Amazon App Store. This will significantly increase the number of available apps for your BlackBerry!

I welcome comments and feedback on this post. I would particularly enjoy hearing of other apps that you might have used that assist you in managing your diabetes.