Are Vitamins Part of the Fountain of Youth? 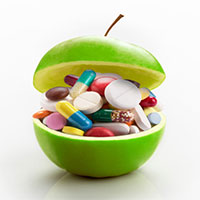 Obviously, you know what vitamins are, but what are telomeres?

The telomeres are sections of DNA at the end of each chromosome, that serve as a cap to the genetic material and function to ensure the cell’s chromosomes do not fuse with each other or rearrange during normal cell replication, which could lead to cancer.The aging and lifespan of normal, healthy cells are linked to the so-called telomerase shortening mechanism, which limits cells to a fixed number of divisions. The purpose of telomeres is critical to the life of the cell. If cells divided without telomeres, they would lose the necessary information at the end of each chromosome. In this way, telomeres prevent chromosomal fraying, much like the ends of shoelaces prevent unraveling. (1)

In 2009, the Nobel Prize in Physiology or Medicine was award to three scientists: Elizabeth Blackburn, Carol Greider and Jack Szostack. They discovered that cells can maintain the length of their telomeres with an enzyme called telomerase, which adds genetic material at the end of the DNA strand, thus lengthening the number of times it can replicate, which ultimately prolongs the life of the cell.  It is not active in most cells, but is active in stem cells, germ cells, hair follicles and most cancer cells. (1)

Normally, with each replication of the cells, telomeres shorten and when totally consumed the cells are destroyed or die (apoptosis). As reported in the journal Nature in 2011, scientists at the Harvard-affiliated Dana-Farber Cancer Institute, found that the basic cause of age-related health decline is malfunctioning telomeres and that telomeres are highly susceptible to oxidative stress, which will shorten telomere length and enhance cellular aging. Therefore telomere length is a marker of biological aging.  Shorter telomeres have been associated with metabolic abnormalities, obesity, and several degenerative diseases including cancer, diabetes, dementia, and cardiovascular disease. (2)

How To Lengthen Your Telomeres and Find the Fountain of Youth

In a study done by Honglei Chen, MD, PhD, and his co-workers from National Institute of Environmental Health Sciences--which was published in 2009 in the American Journal of Clinical Nutrition--the multivitamin use and nutrient intakes of 586 women aged between 35 and 74 were analyzed, along with their telomere length in a sister study. A 146-item food questionnaire was used to determine multivitamin use and nutrient intakes. Compared to non-multivitamin users, the researchers noted that the telomeres were on average 5.1 per cent longer for daily multivitamin users. In an attempt to identify specific nutrients that could be behind the observations, intakes of vitamins C and E from foods showed a positive relationship with telomere length. (4)

Other than taking multivitamins and getting adequate vitamins C, D and E, minimizing associated risk factors that are linked to shorten telomere activity is recommended. Here are five such risk factors to avoid:

How Do You Measure Telomere Length?

We can now measure our telomere length with a simple blood test. By using a ratio of the genetic material contained in a nucleated white blood cell telomere relative to the length of a single copy gene of known size to calculate an approximate telomere score.  This ratio is then compared to a population of people with similar chronological age. (5)

Additional vitamin supplementation might be the right fit for you, and certainly worth a discussion with your provider first. And think about getting a blood test to determine telomere length as well as seeing if you have any vitamin or mineral deficiencies.