Spices and herbs add great flavors and zing to our food while contributing very few calories and fat. Most (unless salt is added) are very low in sodium. They make the food we eat tasty and very enjoyable. Readers ask often if there are any spices that could lower blood glucose. This blog will explore the differences between spices and herbs. We will focus on the spice “ginger” and the research that has been done on the effects it has on blood glucose. 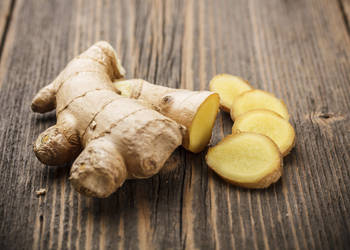 The Difference Between a Spice and an Herb

Let’s first go to basic definitions. According to the United States Department of Agriculture, a spice is an edible flavoring that usually comes from the fruit of a plant. Exceptions to this include cinnamon (comes from the bark of a plant) and ginger (comes from the rhizome or bulb) of a plant. When used for consumption and seasoning foods, herbs comes from the leaves of plants that “do not have woody perennial stems like a tree or shrub”. (1) As you can see, ginger is a spice. It is common throughout the world. (2)

The scientific name or botanical name for ginger is Zingiber officinale Roscoe. (3)  Countries such as India, China, Nepal, Nigeria, Brazil, Costa Rica and Fiji produce much of our ginger. Hawaiian ginger is known for its excellent flavor. (4) Here are some tips on how to select and store ginger for home use.
Ginger is used medicinally for helping with nausea and vomiting, gastrointestinal ailments and certain types of headaches. (3, 4)  Ginger has also been studied for its effects on diabetes. (2)

Like all substances, taking ginger should be discussed with your medical team before adding it to your diet. Ginger might cause irritation to the skin. There are special warnings concerning using ginger while pregnant and/or breast feeding. It may tend to increase bleeding time. For people with diabetes, it may cause a lowering of blood glucose. Your health care provider may need to adjust your diabetes medication. It is thought that high doses may cause harm to the heart in some people. There are potential interactions with medications and other supplements that need to be considered. If you are thinking of using ginger, discuss this with your pharmacist to review potential interactions. (8) Here is a partial list of some of these medication interactions.

Recipes that Include Ginger

As mentioned before, talk to your health care team if you are considering using ginger for any reason including potentially helping to lower blood glucose.  The studies that are mentioned in this blog are very small so be conservative in your decision making. DiabetesCare.net has recipes that use fresh or powdered ginger. Here are links to five of our recipes. We hope you enjoy using them!