Do you know someone who snores? Is it you? Is snoring the same as sleep apnea? If you think they are different, you are correct. In this blog we explore both snoring and sleep apnea. We will discuss lifestyle habits that increase the likelihood of snoring and/or sleep apnea and touch upon snoring in children. The diagnosis and treatment of sleep apnea discussion will be followed by a review of its relationship with type 2 diabetes. 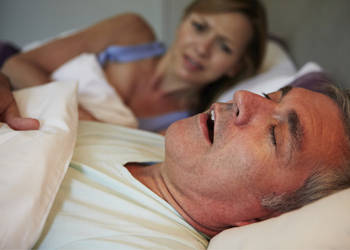 The sounds made when a person is sleeping and the tissues in their airway move, strike each other and vibrate is the medical definition of snoring. (1) Children as well as adults snore. It is thought that almost all children snore occasionally and about 10 percent snore just about every night. (2) In adults, approximately 45 percent snore once in a while and 25 percent do so frequently. It is estimated that one half of snorers have what is called primary snoring (also call simple snoring) and the other half have a serious condition called sleep apnea. (3,4) Primary snorers typically do not have cardiovascular disease, difficulty with concentration nor are they tired during their day. The main problem primary snorers have is annoying the people around them while they sleep. (5) People with obstructive sleep apnea may have these problems. All snorers should request help from their doctors to see if they should be evaluated for serious conditions such as obstructive sleep apnea and central sleep apnea. The term apnea describes conditions where breathing stops. In sleep apnea, breathing stops briefly during sleep. (6)

These conditions are very serious as people with OSA and/or CSA stop breathing for short periods as they sleep. This can occur up to three hundred times a night. Vital organs such as the brain do not get needed oxygen that is provided by breathing normally. It is not hard to imagine that people with this condition also wake up tired from the lack of normal sleep cycles. (4) Sleep apnea is considered a problem when in a one hour time period, breathing stops at least 5 times for more than 9 seconds. (6).The name of the type of doctor that specializes in OSA is an otolaryngologist or sleep specialist. A sleep specialist is often seen for CSA.

This type of apnea is caused by an “obstruction” or blockage of the airway when tissues in the oral cavity or throat collapse blocking the airway during sleep. (7) Lack of proper sleep can cause problems such as falling asleep while driving and may affect the ability of the person to do a day’s work. When untreated it increases the risk of many medical problems including heart disease (strokes and heart attacks), and diabetes. (4)

Causes of OSA include:

This condition is caused by a malfunction of the brain that signals muscles of the body to breathe. It is not due to a blockage of the airway. (7) For more information on central sleep apnea visit the mayoclinic.org.

Lifestyle habits that increase the likelihood of snoring and OSA

In 2012, the American Academy of Pediatrics (AAP) released practice guidelines for snoring in children. It is estimated that as many as 5.7 percent of children in the United States have a condition called uncomplicated obstructive sleep apnea. The AAP recommend screening all children for snoring routinely. It is also recommended that if a child has symptoms of sleep apnea such as snorts or gasps, behavior problems and routine snoring they should be referred for a sleep study. Sometimes tonsil surgery is needed and others may to use a device while sleeping called a continuous positive airway pressure machine (CPAP) to keep their airways open. Overweight children are encouraged to lose weight and sometimes steroidal nasal sprays are ordered to help. Treatment is needed in children in order to provide adequate oxygen during sleep and prevent serious problems such as cognitive deficits, heart problems, high blood pressure and inflammation throughout the body. (2,9)

How is sleep apnea diagnosed and treated?

Usually when a person seeks help from a specialist for snoring, they will experience a comprehensive examination of the oral cavity and neck. Problems related to allergy, sinus infections or problems with obstruction will be noted. Many times a person will need to go to a sleep lab for a sleep study. (4)  During a sleep study, the person will be monitored while sleeping to find out what is going on. Recommendations will be made for treatments by the physician. Options may include a CPAP machine worn at night to open up the airway, surgery, mouth appliances to help open the airway and injections to cause the stiffening of the soft tissue. For more information about treatment click here: http://www.entnet.org/content/snoring-and-sleep-apnea

The International Diabetes Federation has brought to attention the relationship between type 2 diabetes and sleep apnea.

The IDF recommends screening and treatment for certain people with diabetes. Read the IDF consensus statement on type 2 diabetes and sleep apnea. Snoring and sleep apnea are important issues to discuss with your physician. Make sure you discuss snoring with your medical team so you can be treated if necessary.