The Connection between Pancreatitis and Diabetes 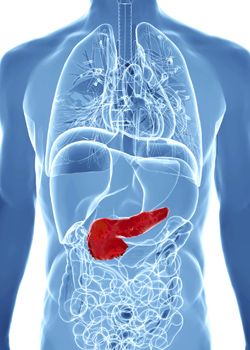 The Definition of Pancreatitis

The pancreas which is located behind the stomach and very near to the small intestine also has what we call exocrine functions. Enzymes are produced as needed to help with the digestion of fats, proteins and carbohydrates.  These enzymes are not released into the blood but they travel through a series of ducts that end in the small intestines where they usually become active. (3, 4)   In acute pancreatitis, there is a problem when these enzymes are prematurely activated inside of the pancreas. They actually start to digest pancreatic tissue. This is very painful and causes the pancreas to swell and potentially bleed which can damage the pancreas. (3)

What can cause Acute Pancreatitis?

There are many possible causes of acute pancreatitis (AP). The most common cause is a history of alcoholic binge drinking. (5)  It is thought that as much as 70% of people with acute pancreatitis have been habitual consumers of alcohol. They might drink approximately 5-8 drinks per day for up to 5 years. (3)

Another condition called biliary colic can also cause AP. (5) Biliary colic results from the blockage of the duct that drains the gallbladder by gallstones. This may cause cramping that resolves if the stone passes into the small intestine. (6) When gallstones are passed from the gallbladder, they travel down into the bile ducts which can block the pancreatic duct. (3) When the pancreatic duct is blocked, the enzymes cannot drain into the intestines.

Other less common illnesses that may cause acute pancreatitis are autoimmune problems, high triglyceride levels, cystic fibrosis and use of medications like estrogens, steroids and thiazides. For a more complete list of conditions that are associated with acute pancreatitis, visit the MedlinePlus page on Acute Pancreatitis.

A recent review of the literature (2014) and meta-analysis was carried out at the University of Auckland in New Zealand. The researchers looked at 24 prospective studies with a total of 1,102 patients that had experienced AP. After experiencing AP, a total of 37% of the individuals developed pre-diabetes or diabetes. Sixteen percent of the people that developed diabetes needed insulin after experiencing AP. It was shown that a diagnosis of AP will increase the risk of diabetes in individuals by more than “twofold” over 5 years. The researchers conclude that studies need to take place to see how this risk can be lowered. (7)

People with type 2 diabetes that take incretin mimeties or DPP-4 inhibitors should have a discussion with their medical professionals about their chance of developing acute pancreatitis due to their medication.

The DPP-4 inhibitors include:

If you are experiencing AP, you may have the following symptoms:

Report immediately to your doctor if you think you may be experiencing AP Your doctor will most likely need to draw blood to look at various parameters such as enzyme levels to help with a diagnoses and you may need an abdominal CT, MRI or ultrasound. Treatment most likely will involve hospitalization and receiving IV fluids. You may need to stop all food and beverage by mouth and take pain medications. (3) When individuals obtain treatment for the cause of the AP, they may avoid attacks in the future. This may involve:

Chronic Pancreatitis (CP) is inflammation to the pancreas that usually cannot be reversed. An exception to this is auto-immune pancreatitis which affects a small portion of the population. Auto-immune chronic pancreatic is potentially reversible with the use of steroids. (10)

Chronic Pancreatitis usually develops after acute pancreatitis or in people that drink excessive alcohol.  The difference between AP and CP is that scar tissue develops in the pancreas in CP. (9) Pain may be intense and the person may suffer from ongoing gastrointestinal symptoms. Diabetes may develop. A person with CP must stop drinking alcohol and smoking. Therapy may include taking pancreatic enzymes with meals and if diabetes develops, injecting insulin. Following a low fat diet may also be recommended. (11) Diabetes develops in about half of the people with chronic pancreatitis due to destruction of the insulin producing cells in the pancreas. (12) For a detailed information on Chronic Pancreatitis visit patients.co.uk or nhs.uk.

Learn about subjects like pancreatitis so you can take better care of yourself. We at diabetescare.net care about you!