Are You Getting Enough of the Sunshine Vitamin? 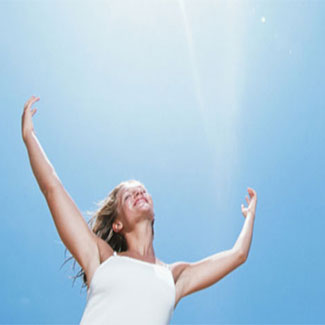 Vitamin D, also known as the sunshine vitamin, is the most researched and talked about vitamin of our day. Most people are familiar with its role in building strong bones. However, researchers have uncovered vitamin D’s role in many other areas of health--making it even more important to be sure to have an adequate vitamin D level and intake.

Studies have identified other important roles of vitamin D, which include lowering the risks of certain cancers, cardiovascular diseases, type 1 and type 2 diabetes and rheumatoid arthritis--just to mention a few. It is well known that a large proportion of the population has low vitamin D levels, and this is concerning because it has the potential to impact health in so many ways.

Vitamin D is called the sunshine vitamin because our bodies actually produce vitamin D through sun exposure to our skin. For some people this may occur with as little as 10 minutes of sun exposure per day, but the exact amount of vitamin D your skin makes from the sun depends on a variety of factors. These factors include: geographic latitude, cloud cover, season of the year, time of day, sunscreen use, and amount of skin exposed and skin pigmentation. It is estimated that more than one billion people worldwide have vitamin D deficiencies due to limited sun exposure.

There are some foods that are fortified with vitamin D including: milk, yogurt, cereals, and some juices. Also a few foods, such as, fatty fish and eggs have a small amount of naturally occurring vitamin D in them that may be absorbed by the body. However, for the most part it is impossible to get an adequate amount of vitamin D from food. Therefore, we rely on unpredictable sun exposure to catalyze production of this very important vitamin. Sounds a bit concerning, right?

A few years ago, I became curious about my vitamin D level. I felt assured that my diet included foods that contained vitamin D, but I was not convinced that my sun exposure was adequate because I’m African American, so my darker skin reduces my ability to make vitamin D from the sun. Also, I have lived at a northern latitude all my life, which does not allow for the proper sun exposure, particularly in the winter. So, I asked my doctor to test my vitamin D level and to my surprise it was very low. My doctor prescribed a once weekly supplement for two months, and then I went back and had my level re-checked. At that point, it was up to the low end of the normal range. Since then I have needed to take a daily supplement of vitamin D to maintain an adequate level. I did have some out-of-pocket costs associated with having the lab drawn, but it was worth it.

Should you have your vitamin D level checked? I highly recommend it for everyone with diabetes and for those working to prevent diabetes. Also, if that is compounded with limited sun exposure, darker skin, obesity, and/or are an older individual your risk of vitamin D deficiency is even greater, so you should definitely have your vitamin D levels tested and here is why:

Unfortunately, everyone in the studies did not see benefits from increasing their vitamin D intake, but it did help a significant number of people making it worthwhile for you to consider.

This leads us to our next point, how much vitamin D is recommended?  It depends on who you ask because it gets controversial. The recommendations vary widely for adults from 600 IU/day from the U.S. Food and Nutrition Board to 5,000 IU/day from the Vitamin D Council. The Endocrine Society recommends 1,500 - 2,000 IU/day.  Personally, I have to supplement with quite a bit to keep my level up. This is something that should be discussed with your doctor.

In the meantime, spend more time outside every day; especially if you tend to be an indoor person. Also, be sure that your diet is adequate in foods that are fortified with vitamin D.

Consider having your vitamin D level checked. You may want to call your insurance company to see if they cover it. If not, you can order a testing kit from the Vitamin D Council for minimal cost. Once you know your level, you and your doctor can come up with a plan to best meet your needs.