How a Balloon Can Aid Weight Loss

Weight loss using a balloon? If you have not heard, the ReShape Integrated Dual Balloon System has recently been approved by the FDA. The ReShape is the first non-surgical weight loss procedure for people with mild-to-moderate obesity.

Feel uneasy about the idea of having balloons in your belly?  Rest assured, balloons have been used in medicine--specifically heart and cardiovascular procedures--for decades. 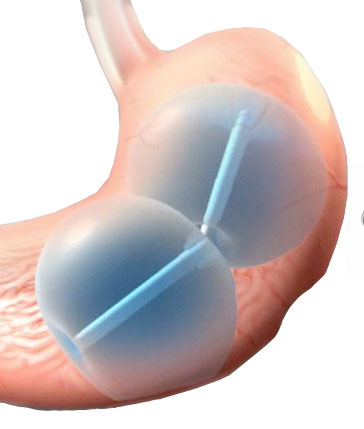 The ReShape (pictured here) is a dual balloon mounted on a flexible shaft that is inserted endoscopically in the stomach and filled with saline. It works by restricting food intake and slowing gastric emptying. Insertion is done during a 30-minute outpatient procedure and the balloon remains in the stomach for six months where it mimics the natural curvature of the stomach to enhance tolerability.

In the REDUCE clinical trials (n=326) looking at the ReShape, The FDA determined that the device was safe and effective based on a clinical trial involving 326 obese participants aged 22 to 60 years who had at least one obesity-related condition. One hundred eighty-seven participants randomly selected to receive the ReShape Dual Balloon had lost 14.3 pounds when the device was removed at 6 months as compared to the control group, which lost 7.2 pounds on diet and exercise alone. The results showed a 2.3 times greater weight loss in the ReShape group compared to the control group.

They had kept off on average 9.9 pounds of that lost weight at the end of the following 6 months. The remaining participants who underwent a sham endoscopic procedure without the insertion of the device lost on average 7.2 pounds after 6 months.

The dual balloon structure is designed to minimize the risk of migration or obstruction in the unlikely event of a balloon leakage or deflation. Comprehensive counseling and support services such as in-office sessions will be provided to patients during the six months of treatment and for six months after it is removed.

Who are ReShape Candidates?

It is intended for adults with a BMI of 30-40 kg/m2 who have one or more obese-related health conditions such as hypertension, dyslipidemia, or diabetes and have had unsuccessful weight loss with diet and exercise alone.

Patients may experience vomiting, nausea, abdominal pain, gastric ulcers, and feelings of indigestion once the device is in the stomach. Intestinal obstructions have been reported due to deflated balloons passing into the intestines and have required surgical removal. Death due to intestinal obstruction is possible and has been reported with other intragastric balloons.

For medical providers here are some practice pearls:

Who is not a candidate:

Those who have had previous gastrointestinal or bariatric surgery, those who have been diagnosed with inflammatory intestinal or bowel disease, large hiatal hernia, symptoms of delayed gastric emptying, or active H. Pylori infection, pregnant women, and those who use daily aspirin therapy.

While there is not a lot of information to gather in terms of long term studies or a large number of patients who have used the device here in the United States, it has been in practice in Europe for four years now, and offers people with obesity another potential treatment to aid them in weight loss.

For people who are interested in finding out more information about this new device, go to the company's website, which can be found here. And for providers who want to learn how to implant the ReShape can go here.